It’s the End of the World As We Know It (and I feel fine): a collection of thoughts about John Kissick and his work 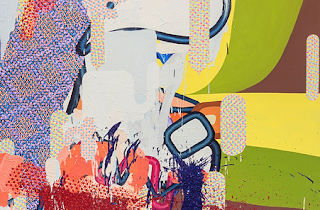 *the following essay is taken from the catalogue for the exihibtion, John Kissick "Boom Bits" at the Thames Art Gallery. The show opens on July 10th.

That’s great, it starts with an earthquake, birds and snakes, an aeroplane, and Lenny Bruce is not afraid.

I first met John Kissick at one of his openings at Leo Kamen Gallery in 2005. I’d recently been accepted into the MFA program at the University of Guelph, so I thought I’d drop in and introduce myself to my new “mentor”. He looked a lot younger than I’d expected – way too young to be the Dean of my new school. We talked about school. We talked about his paintings. We talked a bit more about painting in general, and a lot more about abstract painting specifically. It took all of six seconds for me to realize that I was going to the right school. He told me that the work he’d made before these paintings would never be shown. They were abstract also, but those works were a personal response to the death of his father. At a certain point, he realized, those paintings he’d been making “weren’t art”. They were “therapy”; and he was not interested in sharing his therapy with other people. That, he said, would be wildly narcissistic and self-indulgent. “Nobody needs to see that”, he said. This was my first introduction to John, and to his complicated relationship to the idea of painting as a form personal expression.

Eye of a hurricane, listen to yourself churn, world serves its own needs don’t mis-serve your own needs.

I’ve known John for ten years, and I would certainly consider him a friend – a good friend even . That said, our conversations are mostly related to art, and to painting. I’ve only met his wife once, and I’ve never met his kids. John is no longer on Facebook, and never really was. (He did have a profile for a little while, but it only ever had the generic Facebook blue-face-person that you get when you initially sign up. In the year or so that his account was “active”, I’m pretty sure he never posted a status update or anything.) Through my teaching, I’ve come to realize that it’s pretty normal for students to want to know about their favorite teachers personal lives. And I’ve certainly wondered about John’s. Every once in a while, I’ll read an essay of his, and he’ll make a statement that seems to contradict my understanding of him - who he is, where he comes from. He drops f-bombs in his writing (and art titles) with far more frequency and conviction that he ever would conversationally. He talks about growing up in Scarborough, and punk rock and drug culture. Through these images, I try to piece together a picture of who John was when he was younger. I picture a guy in a black leather jacket, white t-shirt tucked into skinny-ish faded blue jeans (that might have a rip in one of the knees) with a black leather belt. He wears black Doc Martin shoes (as opposed to boots), and has the same haircut that he has now. For whatever reason, I find it impossible to imagine him with a different haircut. At one point, however, I think it might have been a bit longer in the back than it is now. Basically, he looks like how I imagined cool college kids to look when I was in grade 7. He listens to the Smiths and REM.

Feed it up a knock, speed, grunt, no, strength, the ladder starts to clatter with a fear of height, down height.

REM released the music video for “It’s End of the World as We Know It (and I feel fine)” in November of 1987. I was 12 years old. I liked the video because it showed a kid that was about my age messing around with a skateboard in a shack. (When I was 12 years old, I liked anything that had to do with skateboarding. In hindsight, I blame this on “Back to the Future”.) This kid looks like a life-sized, full-colour photocopy of a 14 year-old Tony Hawk. He is in some cabin/clubhouse in the woods “practicing” his late 80’s flat-ground skateboarding tricks. The best part of the video, however, is the fact that he’s not really practicing at all. He’s “playing”. You can feel the kid imagining he’s at a competition in California while he does his hand plant. He is a star of the Bones Brigade. The crowd roars when he lands his big ollie. They grow much louder when he sticks his acid drop off of the (beat-up sofas) railing. He is not just re-enacting the gestures of his heroes. He is one of them now.

Wire in a fire, represent the seven games and a government for hire and a combat site.

If the son kills the father, he remains reverent of the grandfather. Intuitively, this is easy to understand. Parents are charged with enforcing rules – teaching a child the ways of the world, making sure they have the tools to succeed in adulthood. Grandparents really only have to buy ice cream. And really: how can you not like people that buy you ice cream? This succession is important to artists as well. Each generation of artists forms their reputation by revolting against the doctrines of their immediate predecessors. John’s work is rooted in the critical reaction to the hokey-utopian ideals of the really late-Modernist abstractionists of the 1970’s. It was an era of eccentric, post-colour field weirdness that has been, more or less, entirely stricken from the art historical record . John’s work pushes back against all of the quasi-spiritual rhetoric that surrounded their ad nauseam pushing and pulling. They were his art parents. This is the natural order of things.

Left her; wasn’t coming in a hurry with the Furies breathing down your neck.

The “Groovefucker” paintings on view in this exhibition were first shown in Berlin. According to Google Translate, the word Groovefucker translates to Nutfucker in German.

I am a sucker for old art history books. After a talk I gave at the Robert McLaughlin Gallery in Oshawa, I was given a stack of their old exhibition catalogues. One of them is for a show of Alexandra Luke from 1987 . In the middle of the book is an assortment of full colour reproductions. These colour reproductions, however, are very sparingly prevalent. The vast majority of the pictures in the catalogue are reproduced in black and white. This is more than a little hilarious. Having my share of old art books has made me somewhat accustomed to seeing important paintings reproduced in back and white. It’s one thing to see a black and white version of “the Raft of the Medussa”; it is something else to see a black and white version of Alexandra Luke. The actual paintings are nothing but colour, so their black and white versions are grayish blobby swirls of basically nothing. For an art geek, such as myself, this is high comedy. The etchings of John Kissick, on view in this exhibition, are highly comic in this manner as well. They are tempered with a similar absurdity. It is absurd to remove colour from John’s work; and it is bat-shit-crazy to render them in the most meticulously ass-backwards form of printmaking ever conceived (etching). These works are fantastically beautiful and intellectually compelling, but my sides hurt just thinking about their comedy.

Look at that low plane, fine; then uh-oh, overflow, population, common group but it’ll do, save yourself, serve yourself.

The song “It’s the End of the World as We Know if (and I feel fine)” is a linguistic collage wrapped in a catchy-as-hell, whiter-than-anything, pop song. The lyrics fire rhythmically like a late 80’s rap with a chorus forensically contaminated by barbershop harmonies. As it turns out, the Sex Pistols finally met Buddy Holly in 1987, sharing a cherry shake at CBGB’s. REM seem kind of upset about the fact that the world they were raised to believe in no longer exists (if it ever actually did). But whatever: no biggie.

World serves it’s own needs, listen to your heart bleed.The glitter used in John’s recent paintings does something formally that’s really interesting: they breathe an extra six to twelve inches of space into his work. Intensifying the value of his foregrounds, they expand the threshold of his colour range. It makes these spaces more volumetric – like someone inflated his recent work with a tire pump.

The rhetoric that surrounded painting in the late 1980’s was all filled with fire and brimstone, damnation and redemption. Everything was always dying or reborn - as if the perpetual doomsday threat from their cold war childhoods had invaded the cultural dialogue of their adulthood. If the world (as we know it) could end at any given moment, why couldn’t painting suffer a similar fate? Douglas Crimp’s “The End of Painting” had pressed the red button, and a whole generation learned to paint as if hiding under their desks during an air raid. If John was born as an artist in the utopian wellspring of way-too-late Colour Field painting, then the doom and gloom post-neo-everything 80’s were his coming of age. His paintings were born in free love, raised in hot tub key parties, but graduated in an HIV crisis. An Octopuses Garden was their playground and they went to school in a California hotel, but all they ended up with was Stevie Nick’s deviated septum. Like everyone else, John’s paintings quit smoking in the early 2000’s. Their glittered tumors grew anyways.

Before Kissick started making paintings in the late 1990’s, he made conceptual art. A lot of this work used text. My favourite of these pieces is a banner that says: “a tear is an intellectual thing”.

It’s the end of the world as we know it. (How I need some time alone).

As much as John’s work is meant as a clear refutation of the idea of painting as personal expression, I can’t help but know that his paintings are, in fact, a deep reflection of his self. His paintings are screaming with a yearning for some kind of “authenticity”, but tempered by the realization that unmediated experience is no longer possible, that optimism collapses under the weight of its own naivety, and that the word authenticity itself needs to be placed in rabbit-ear-quotations. John’s paintings are bursting with hope and apprehension, optimism and trepidation. In this sense, they are a totemic collection of the conflicting creeds that have coalesced in his lifetime, and the visual detritus left in their wake. These paintings are John and his memories. They are where he grew up, and who he is now.

I once interviewed John for a school project. I asked him about post-structural rhetoric , and how nobody since had come up with a convincing counter position to their cynicism. John said: “Ya. Everything is mediated. But you’re about to become a parent. At the end of the day, whether it’s social coding or not, you’d throw yourself in front of a bus to protect that child.” The paintings of John Kissick live in this rift – between the things that you intellectually understand and the things that you feel, between the things that you know and the things that you believe. It is a four way stop where the signs are poorly marked but the signifiers are clear as day. His paintings stand in that intersection upright and dead centre, braced from within by the near certain impact of a high-speed collision.

*please forgive the lack of footnotes. They're just too much of a drag to insert with this software, so I don't include them....