People Try to Put Us Down, Just Because We Get Around: 500 words about my generation (with optional annotations). 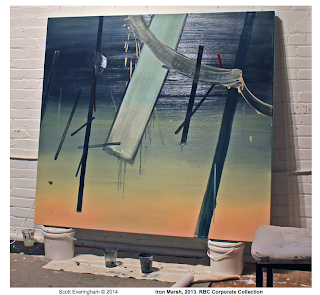 Youth is a relative term. Culturally, it’s something we’re drawn to. Young rock stars. Young movie stars. Young art stars. We adore our flowers in full bloom. In an art world where nobody serious takes you seriously until you’re 28, being under 40 does constitute youth, and the artists in this exhibition all fall under that milestone. In attempting to draw parallels between these artists, whose art is formally, materially and conceptually heterogeneous, it is important to contextualize the larger art conversations that informed their schooling, their coming of age period as artists.

All of these painters were undergraduated between 1998 and 2004, and graduate schooled shortly thereafter. For about twenty years before this period, painting was thought about rather skeptically. Having officially “died” in 1981, with the final blow being publicly delivered by Douglas Crimp in the pages of October , multiple generations of artists were schooled under the belief that painting was no longer a viable activity for contemporary artists to pursue. But the case was never entirely closed (and painting classes were still full). Resistance was formed, the rebellion took flight, and ideas of pluralism and relativism in art gained increasing intellectual and artistic traction. During this period, however, an artist choosing to make a painting at all was viewed as a polemically politicized (and potentially subversive ) activity. Battles were fought, and eventually the war for painting was won. Nobody knows when this happened exactly , and not all of paintings detractors have conceded defeat. Like those storied Japanese soldiers marooned on desert islands who were never informed that the war was lost, there are still some anti-painters stranded on islands in remote wings of academia and art museums. For the most part, however, sometime in the late 1990’s and fueled by a suddenly-explosive-late-Capitalist art market, painting seemed ok again. Actually, it was more than ok. Painting was it. Vitamin P was published in 2001 . The RBC Painting Competition happened here , and painting was everywhere all over again.

The artists in this exhibition, Dil Hildebrand, Scott Everingham and Melanie Authier were all trained in this environment. Rather than having the intellectual pressure of defending their medium with every brushstroke , they could entirely focus their energies on the equally difficult task of making a good painting . Their work could look like anything, be about anything, be drawn from anywhere, and happen anywhere. In this brave new paint friendly art world that has adopted globalism, pluralism, and relativism with gusto, none of the severity of the previous generations intellectual positions seems necessary. Flexibility is more important than commitment. In a world with attention deficit disorder, 500 channels on every television and Google searches, no singular point of view seems adequate o reflect the frantic multiplicity of our contemporary experience. Like the lovechild of an art historical key party, the work of these artists reflects the continued desire for an aesthetic promiscuity. And they’re all young enough not to worry about doing so.

2. Although neither of these notions were “new” ideas, they seemingly took on more importance.

3. For a great description of how painting was viewed, by some, as a subversive activity see Thomas Lawson’s seminal essay, “Last Exit: Painting” which was first published in Artform, October, 1981.

4. Although there were no shortage of potential champions, such as Robert Storr, Barry Schwabsky and Jonathan Bentley Mays, there is no singular text that “brought back painting” in a similar manner to how Crimp’s “Death of Painting” seemed to signal it’s demise.

5. Vitamin P is a book that was published in 2001 by Phaidon. It’s an encyclopedic compendium of what was, at that time, cutting edge painting. The catalogue essay by Barry Schwabsky, “Painting in the Interrogative Mode” was hugely influential on the next generation of painters and remains required reading for most painting departments. A lot of the ideas I’m expressing in the blurb are informed by this essay.

7. Crazy as it may sound, this is a heavily loaded expression. Whereas the Avant Garde and Neo-Avant Garde (who continue to be paintings biggest detractors) sought to apply the quasi-objective criteria of artistic novelty and historical priority to ascribe importance to works of art, contemporary art has returned to a more subjective (and potentially traditional) criteria associated with “connoisseurship”. This model requires the (arguably) more difficult task of collectively deciding what’s worthwhile.