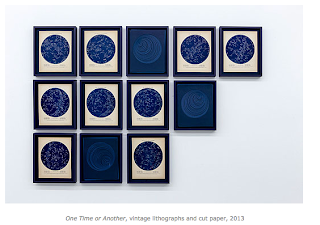 There is meaning in labour. Intrinsically connected to artistic process, the amount of labour put forth by an artist plays an important role in shaping our understanding of the piece. Andy Warhol famously worked in a manner that mimicked Fordian assembly. Sol LeWitt often mailed instructions to galleries where his works were made by others. The details of medieval, illuminated manuscripts were rendered by hand, revealing the devotional nature of their artisans - the roots of a “Protestant Work Ethic” on display in every character. The works of Adam David Brown recently on display at MKG 127 are in conversation with all three of these models. Although Brown’s connection to Warhol and LeWitt is more visibly apparent, it is his connection to the later that is most compelling.

In “One Time or Another”, Brown cuts circles out of 42 sheets of multi-hued blue papers. There are three of these pieces. In “Reflection”, Brown removes ovals out of 110 sheets of mirrored mylar. In “For The Time Being”, Brown cuts out large scale, Times New Roman looking text, leaving the remnants of this surgery along the bottom of it’s frame. Despite the fact that his geometric cuts could be performed by a die-cutter and the text pieces by a laser-cutter, Brown meticulously hand cuts these papers. There is meaning in these activities that relates to the broader frame of Brown’s thematic concerns.

All of these works are focused on ideas of time. Although many recent artworks deal with time in it’s more human scale (through concepts such as history or nostalgia), Brown’s notion of time is far grander. Thematically his works have more in common with Stephen Hawking than Anselm Kiefer. The exhibition title, “For the Time Being” is rooted in the popular expression, but also cleverly inverts the wording of Heidegger’s “Being and Time”. In “LIFE”, Brown draws the word “LIFE” in pink eraser. In “One Time or Another” he cuts up 19th Century star charts. In “Salt, Sand, Time”, he pours salt and sand (like an hour glass) to recreate the Rosetta Stone. In all of these instances a vast thematic profundity unites their scope. Since the 12th Century when Christian monks first saw physical labour as a means of contemplating divinity , there has been a connection in Western culture between hard work and profundity. Adam David Brown tethers this gap with his own calloused fingers.