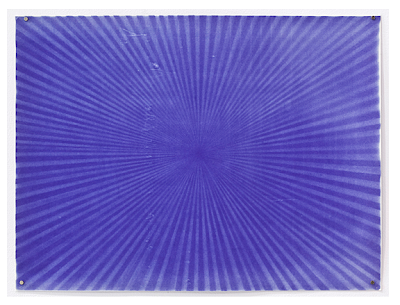 “It all boils down to a question of faith.” This is the first sentence of Thomas Lawson’s classic 1981 essay, “Last Exit Painting” wherein he famously argued that representational painting was the last hope of the avant garde. In the decades that have followed, most painters (along with most worthwhile critics) have given up on notions of the Avant Garde or the “Neo-Avant Garde” due to the perceived irrelevance of a linear progression, master narrative view towards art historical styles and “advancing” methodologies that assigns value to works of art chiefly on the basis of novelty and historical priority. From this point of view, the idea that a series of black squares painted in the 1960’s could signal a final solution to anything is considered miserly and laughable. Although 60’s monochrome paintings might present an end point to a specific way of thinking about painting (a Modernist one), it is certainly not viewed as the definitive end, wherein no other scenarios are able to legitimately unfold. Most of the disparagement that the discipline of painting continues to receive is issued by antiquated art academics that stubbornly refuse to accept the downfall of their own blue-blooded, scholarly upbringing. (The flagship example of this is Art Since 1900’s meager discussion of art after 1985.) You can’t teach an old dog, new tricks, and this rear-guard vanguard are the oldest dogs in art town. One of the most fascinating aspects of Sky Glabush, however, has been the way in which he has fully taken on Neo-Avant Garde rhetoric, and much like Lawson, presented his conclusion that the only legitimate way “forward” for “advanced art” is through traditional, representational picture making.

Glabush’s recent exhibition, “Background”, at MKG 127 in Toronto continued this pursuit of painting as picture making, but in a manner quite different from his work of the past five years (which were mostly large scale, suburban landscape paintings). “Background” presented a stylistically eclectic mix of works. Each of these works made clear reference to earlier, Modernist styles that had implicit and/or explicit relationships to various systems of belief: spiritual, ideological and religious. The Modern era is perhaps chiefly characterized by its loss of faith, its move away from religious belief towards (possibly) the first secular society in human history. The paintings in this exhibition point towards the wide array of belief systems that artists, and Westerners in general (especially represented here by psychedelic, Hippie culture), have aligned themselves towards in order to fill that void.

One of the most intriguing groupings of works in this exhibition is the series of water-colour on paper paintings titled “The Secret Doctrine”. Clearly referencing early European Modernist abstraction like Paul Klee and Frantisek Kupka, Glabush uses the translucency of his material to achieve a stunning luminosity. Like crystal shards refracting light, Glabush frames these forms perfectly within the unrestrictive confines of their rectangular frame. The symmetrical geometry of their composition draws a clear parallel between these earlier Modern artists and non-Western religious paradigms. The use of symmetrical, centred compositional structures is a recurring motif that Glabush uses throughout “Background”. Through this shared convention, he forms ideological links across time and space, from the standard, Modern art historical cannon to Arabic religious art to 60’s psychedelia. The most challenging work on display, and it could literally be read as a provocation, is the large work titled, “untitled (sound)”. This text-based piece reads: “Have you heard of Bahá’u’lláh?” Glabush, who is a member of the Bahai faith, has rendered this work in graphite on canvas. Graphite, as a mineral compound, is a form of carbon that is very close to diamond. As the 35, 000 year old paintings of Chauvet prove, nothing is more archival than carbon. But this painting is also incredibly delicate. Touching up against its surface will smear and destroy its image. It is eternally fragile.

Although these new works by Glabush will most definitely be viewed by most as a departure from his last work, I am arguing that they are, in fact, an outgrowth from the ideological framework presented in those works. If Glabush’s large scale, low-intensity hued canvas’ of the previous five years can be read as portraits of a certain kind of decay, of a collapse in the Utopian ideologies that underpinned Modernist architecture into a crumbling, dystopian landscape characterized by vacancy, then his new paintings can quite clearly be seen as a logical continuation of that project. If Glabush’s previous work can be read as snapshots from the mortuary of Modern idealism (as embodied by a faded, suburban pastoral), then these new works are a report from its autopsy. The time of death is 1970. But it is the cause of death that is the true subject of Glabush’s radiant fascination.