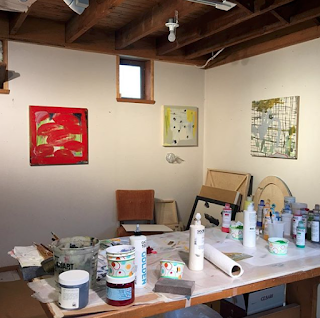 Conjuring Light and the Generosity of Frances Thomas’ Vague Terrains
Pete Smith
“Now that the old sorcerer has left me on my own at last,
I can make his forces labor just exactly as I ask.
I’ve learned in this tower, all his words and spells,
With these mental powers, his art is mine as well.”
Johann Wolfgang von Goethe from The Sorcerer’s Apprentice[i]

The Sorcerer’s Apprentice, in it’s initial incantation, is a 1797 poem written by Goethe wherein a young magicians assistant, tired of the labour involved in his assigned tasks, uses supernatural forces to aid their completion. Things go terribly awry for the young student, and the poem is a cautionary parable about the dangers of summoning forces beyond your control. It’s a famous story (so much so that it has spawned several political clichés in Germany[ii]), and 100 years after Goethe penned those 14 stanzas, the French composer Paul Dukas wrote a “symphonic poem” in response. As a non-musician, this is an interesting problem that I have some difficulty reconciling. How can music, the most inherently abstract form of art, represent a narrative poem? How can a series of notes and chords struck in the key of F minor, communicate something so specific and concrete as the written word?
And yet, it does.
Like most non-Germans my introduction to Goethe and Dukas’ work came through the 1940 Walt Disney sequence in “Fantasia” wherein this synetheisan project is further extended into an animated visual narrative and the protagonist is portrayed as Mickey Mouse. Although Goethe’s story is faithfully (if comically) conveyed in this adaptation, the original poem itself is quite sparse – and the Disney crew stretch the limits of their creative extrapolation as each of Dukas’ crescendos convene delightful, evocative imagery. Enchanted broom sticks waltz around the sorcerer’s lair, and Mickey slips into a dreamlike reverie – conjuring bursts of colour and stars and light from the tips of his fingers and the ends of his broom sticks.
Like brushes wielding light.
I was reminded of the sorcerer’s lair when I visited the studio of Frances Thomas in an old, converted Barrie coach house this summer. Piles of tubes and buckets of acrylic paint cover the surfaces of her tables. Big cans of latex. All of the expected range of cadmiums and cobalts augmented by an abundance of the idiosyncratic and domestic - the lyrical descriptions of commercial house paint. Lover’s Kiss. Italian Leather. Midnight Blue. Historical art pigments and contemporary social colours coalescing on Thomas’s table tops before finding their way onto or perhaps summoned upon, the surface of her paintings.
There are stacks and jars filled with brushes in all different shapes and sizes. Rounds, flats, filberts and house brushes both organized and asunder.
Like broomsticks.
DeKooning often painted with a mop or a broom. The relative scale of a large mark on a small painting cannot be repeated with the same tool on a larger canvas because a thought as a mark as a form is not the same when it has been rendered and reworked as when it has been conjured in a spontaneous singular gesture; and the paintings of Frances Thomas might be faster than DeKooning’s. Abstract artists who work with acrylic, as Thomas does, have a need for speed and a need for the colour of their gestured forms to maintain their full-dial chromatic opulence, not muddied and muted as they do with wet-on-wet oil paint.  The choreography of Thomas’ paintings is both fast and slow. Fast and slow. Fast and slow. Take something. Do something to it. Do something to it again. In the bursts of doing there is no time for thinking. Making is thinking here. The surface of her paintings perfectly record the movements of her body and the thought clusters which beckoned them.
Summoned forth.
But. (And there is always a “but” in good painting.) There is the slowness of looking at work here as well - hour upon hour upon hour of watching, feeling, trusting, and hoping followed by second-guessing, loathing and the anxiety of starting again. Painting over top of on top of over top until somethingvitally emerges. Some kind of truth or at least some glimpse of truth appears.
Upon these rectangular cauldrons.
In “Figure/Ground”, painter and writer Mira Schor talks about the Terrains Vagues in historical French landscape painting – a space that exists between distances where an image is implied rather than depicted[iii]. In these interstitial spaces, the viewer is left free to imagine what objects or dramas lurk beyond the threshold of their vision. In thinking about the necessity of painting, this mechanism is one of its essential manoeuvres – setting painting (and drawing) apart from other image-based disciplines. Although there is certainly room for interpretive, indiscernible imagery within photography, for example, the process of the viewer’s interpretation is always arbitrated by the fact of the object. Although you cannot always tellwhat something is in a photograph, you always know that it actually isa specific something. There is always a right answer to your guessing. This is not the case in painting, and it is certainly not the case in the paintings of Frances Thomas. There is a tremendous generosity in the way she conjures imagery for the viewer. They are nothing. They are something. Ineffable in their efficacy, they are all that you perceive.
Ephemeral.
Back in Frances’ coach house studio, we have a lively chat, a light lunch, and a glass of wine. As I put on my shoes and prepare to depart, I catch a flutter of movement from the corner of my eye. Was it a bird, a plane or a paintbrush hovering upwards?
The generosity of Frances Thomas’ painterly conjuring allows for all possible outcomes.